We kicked-off the pre-event at friday afternoon when we met within a garden restaurant at “Restaurant Eichhof, Luzern”. 10 Players found their way to the pre-event and we talked, drank beer, flipped orbs, played for ANTEANTE, summoned creatures in a prismatic cube round and had quite a bit of fun. Unfortunately for me, grandmaster Jason beat me three times in Ante games and ripped a Tempest Efreet, an Artifact Blast and a Jeweled Bird out of my collection. The most epic move of Jason was first turn bird, second turn City in a Bottle 🙂

Also the weather was fantastic and everbody had enough time to test their brews for the cruise at saturday. We called it a day at midnight after quite some beers and (thanks to Mitja…) multiple “alte Zwetschge”-Shots – haha, nice move Mitja, your next morning will be awful…. 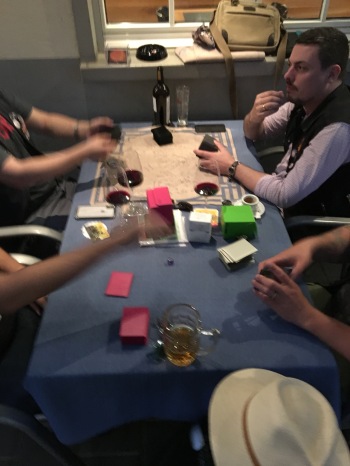 At saturday Lunch time (11.45) we met at the Pier 1 in Lucerne to gather and board the Cruise Ship “Schiller”. Everybody was on time (yes, even the italian gang – haha) and we managed to board the ship and our playground at 12.00. Everybody was excited and we had already a good vibe aboard. We played 5 Rounds of Swiss, followed by Top 4, including the new London Mulligan rule. 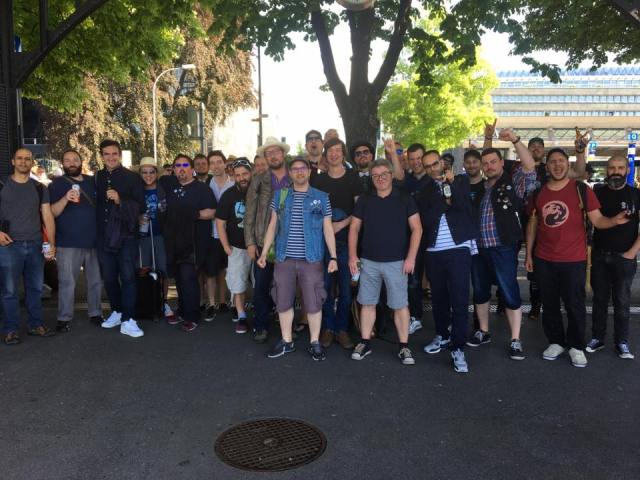 I thought about what to play and had a strong feeling of building something heavy red paired with fast creatures so i ended up with the following List:

Just to make it clear – i possibly will never ever play “Robot-like-style” anymore… i am just not the typical Robot. Either i draw so much mana without business Spells that i can play nothing or i have some Mana and all the Spells without possibility to cast them… pity…

After an introduction about the tournament and the give-away of one Urborg Cruise Pin + one Gentlemen Pin (it was a Gentlemen’s cruise – no Mind Twist or Library aboard of the Schiller 😉 ) we paired the first round.

The first Match was against Jason Schwartz on Erhnam Geddon. We played the night before no Oldschool Match (but ante) so i was not aware of his Deck choice. The first game was a lucky win for me. After a fast start on his side (on the play) with Land, Bird (second turn Land, Mox, Bird, third Turn Serra, fourth turn Armageddon) i was starting quite slow and had not much to interact. I even had to double Bolt the Serra in Turn 3 just to see all my lands go in turn four. Lucky for me was the Lotus Draw later in this game so i burned away both Birds of Jason. After some Draw and Go’s i Managed to hit a Sushi which the closed the Deal.

Second game i had a starthand with Abyss in it and thought, there can nothing go wrong… Jason played Su-Chi’s and in third turn one of those guys did hit the table. Without and Removal for this good friend the Su-Chi dealt 24 Damage to me (4 because i landed my own Su-Chi after some turns which got Sworded. The game was a desaster for my Deck as i had no response in 6 turns to get rid of this walking japanese fish-speciality haha. Third game was Mulligan to five and an early resolved Geddon on the side of Jason which stole my ambitions to win the first match on the cruise. This was the first time i cursed to play Robots and i had a backflash from Viennageddon, in which i swore exact the same thing after a desastrous Robot-Tournament. Some guys never learn…

In the second Match i got paired against Gabriele da Pozzo. A nice Swiss guy from Bern and his 4-Colour Zoo Deck. Unfortunately for him, he held a 2-Land-Hand (with Savannah Lions which got bolted away) in the first match and did not draw any additional Land the whole game. Therefore it was a quick-win for my Su-Chi – Trike combo which i landed on the table. As i did not see a lot of his Deck , i decided to sideboard only 2 Abyss and went into the second game. I had a quick start with a lot of Mana and Mana Vaults Moxen and got defiled after Gabriele managed to counter my Timetwister away with a red blast. My plan to refill my hand was disrupted and with more mana to draw i could not resist the Army of Serendib’s, Serra’s and Lions on the long run and lost second game. We moved to third game (not before i included the second City in aBottle) and we started. It was an intense game with creatures, removals and finally a huge fireball. But the fun fact was that Gabriele did resolve a Circle of Protection Red (which is bad News for me) and we had kind of a “draw-go”-sequence as nobody wanted to pull the first trigger. I drew again Mana into Mana into Mana and was thinking of never ever bringing this game down as one Major win con would be the Fireball. Gabriele then casted a Serra Angel with one City of Brass open and i used my window of opportunity with an amazing Oldschool-thing: Fireball for 14, Fork 🙂 after some “you are so greedy”-Jokes we moved away with the impression of a great Oldschooly end for this intense game.

Third Match was against Daniele Brunazzo and his UGB Juzam Attack! The Deck is really cool but contains a lot of Arabian Nights creatures (Ehrnams and Juzams). Nevertheless, the first game started with a second Turn Juzam and no creature on my side to block and Bolt it to death. Therefore after 4 more turns the game was over. Again great draw-skills for me and my red Robots Deck… The second game started with a Land-Go start on the side of Daniele – not good for an explosive creature deck. I managed to land down a quick City in a Bottle/Abyss combo followed by lots and lots of mana into a huge Fireball after a view turns without responding to CiaB on Daniele’s side. He even had to cast Hippies into my Abyss to block a Su-Chi. Not much to gain on Daniele’s side and we moved on to third game. Another mulligan to 5 for me (grrrrr) and two Energy Flux on his side ripped me apart… Not much to see here folks… 1-2. I loved the Deck of Daniele – great brewing skills mate 🙂

The next match was an honor for me as i faced the great Megu of Fishliver Gang. He was playing UG aggro. Unfortunately, in my 2-0 win i both time resolved a very early blood moon which Megu did not handle appropriate and therefore lost both games with “only” red Mana and nothing (decent) to cast. it was quite a “stolen victory” for me but as we all know this is part of Magic… We had a lot of fun talks and laughter as i teased him (and his friends) of casting always “Ancesterale” (worded in a very much italian-english dialect) hahaha. 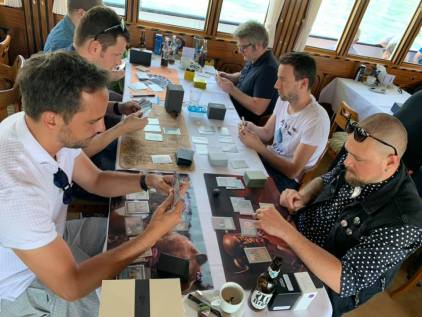 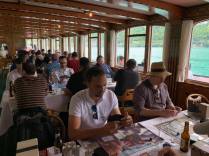 After round for (and a 2-2 for me so far) we had to pause as we were back-travelling to the harbour in Lucerne and had to change the ship for Dinner reasons. Everybody enjoyed the great view outside and took the time to go on the top deck (the sun deck) and got some sun. Also you wil find some other impressions below of the Dinner and Sun Deck Break 🙂 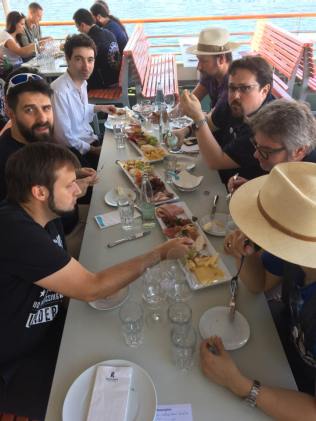 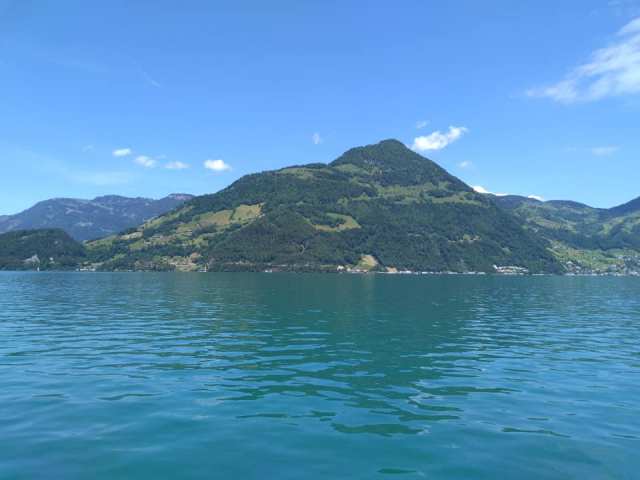 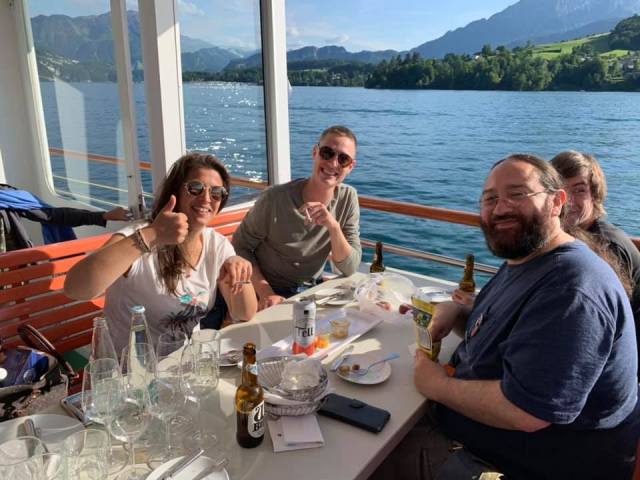 The final round before the Top 4 was against Christian Alb with his amazing Bazaar-Reanimator Deck. Christian won the Brewmaster Challenge with this beautiful brew and it was an honour to play against him. I won after really fun and cool matches 2-1 and i love to bring you the highlights of this match, which were all on his side:

– Berserking a 7/5 Shivan Dragon for the win
– Building such a nice Brew for this tournament – you well deserved the Brewmaster award my friend! 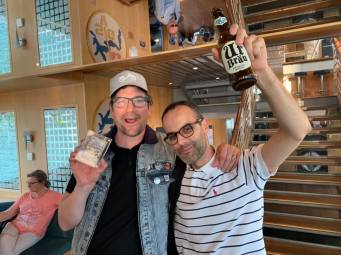 After the Final standings there were 4 Players which will fight for the victory:

The Decklists of the Top 4 you find here.

Before we went into the finals, the Fishliver Gang donated an altered Fishliver Oil for some Tournament Organizer choice of give away. I decided to give it to Team Geissgrind, as they managed to bring two players into the Top4 of this marvelous tournament. Congratulations hereby to Michael “Ruuuuudi” Ruppen and his Team Geissgrind 🙂

We moved on to Top 4 (Francesco – Peter and Matthias – Daniel) and saw some quite interesting games with a lot of “Ancesteral” on every side 🙂 After great semi finals and very interesting final (Francesco from Team Fishliver VS Daniel from Team Urborg) Finally, the winner of the Tournament is Dani Imfeld and his UW Su-Chi Express! Deck: 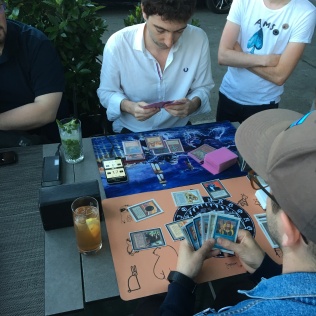 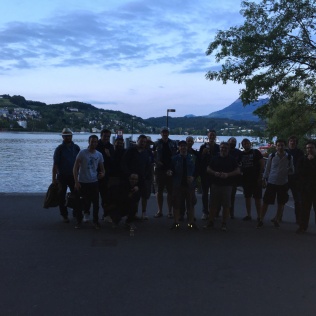 May the Moxen be with you and stay Oldschool

PS: If you want to join the community Brawl at Fishliver Oil Cup: Do it here

One thought on “On the lake with friends”