The Mountain Madness 2020 was the start of the CommuniTour 2020. 24 brave Warriors assembled on the Rigi to fight for Honor, Kraken Rum and some nice Raffle-Goodies. We started at Friday with some preparation work and enjoyed a Swiss Dinner paired with Redwine and some Beer. 16 fellow adventurers arrived one day before the Madness starts. It was amazing to see so many good Magic Friends gathered together – playing some Oldschool Magic. Also, with Mitja as Chef du Cuisine we had a delicious Food package in front of us. 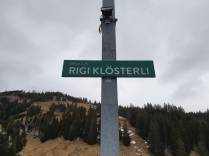 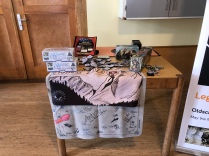 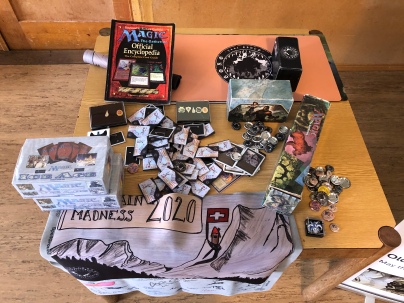 The whole thing started in 2019. We agreed that there should be some Community-Tournaments which will aim to attract community members which will bring other members of the same community to those tournaments (enjoy and bring your Friends). We created a travel voucher which can be won in a Communi-Tournament and has the value of EUR 250.00 for travelling Purpose. We agreed that there should not be a “Spikers first” Price which goes to the Tournament winner but we should aim to give the invite to somebody in a different way. The Lions of Austria Voucher went to the Spiciest Deck in Stockholm (Land Equilibrium won 🙂 ) and the Northern Paladin Voucher at the Mountain Madness went to the luckiest “Rock-Paper-Scissor”-Player. Well done Nicolas Imwinkelried 🙂

The Mountain Madness was held under the “Full Gentlemen Ruleset” – therefore no Library of Alexandria nor Mind Twist were allowed. I know that this ruleset is not everyones choice but it was fun and with this nice atmosphere, it was absolutely fine.  In addition to the Tournament, we did a Charity-Raffle in which everybody can participate with a donation of choice. Legion Urborg donates Fr. 150.00 and the rest of the Players donated together Fr. 600.00 – so we will send Fr. 750.00 to “Kinderkrebshilfe.ch”. Thank you so much fellow Oldschoolers – its great to see your ambition for donations! The Winners of the Raffle received some nice Pins (Jesters Cap and the Moxen), an altered Urborg which can tap for Black and Red (only valid at Mountain Madness and Viennageddon or with permission of the TO 🙂 ) The main Price of the Raffle, a sealed Ice Age Booster Box, went to Leo Bruder – Congratulations my friend.

As a special Gift, Daniel brought an Urborg-Beer-Coaster for everybody. The rule was simple: Write your Name and if your coaster is unattended, one can grab it and you get it back after you Drink a Schnaps! The Coasters were well protected, but not always haha. Thanks Daniel for that great gift 🤘. So after a great Friday evening we welcomed the new day with a real Breakfast for Champions. Chef du cuisine Mitja and his little helper Alex prepared a Swiss Breakfast. Rösti (grated potatoes), Bacon and Swiss Cheese. Also available was Milk, Yogurt, other meat and Orange Juice. Great to start the day with.

I decided to play something new – but i also decided to play trolls of course 🙂 But i did cut blue out of the deck completely and tried the White Red Black Aggro route. I finished with a solid 3-2 and missed top 8 as 9th… haha 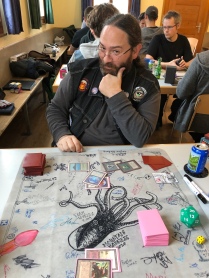 So my first opponent was Peter from Team Geissgrind (a fellow Swiss Magic Friend from Valais). He was on MachmaLauter.dec and tried to beat me down with his Dibs, Lions and Angels. We had three intense Games in which it went back and forth, but finally i did manage to take the victory on my side. It is quite hard for this Deck to fight four Maze of Ith. The game i lost was because of a well timed Psi Blast on his side 🙂 Tight and fun Match. 1-0

Second Match was against finalist Daniel Ernst, also a fellow Swiss Magic Friend from Berne. He plays UR Burn and has Blood Moon Maindeck. Also here we have to go over 3 Games which are incredible tight. His Blood Moon caught me in Game 1 on the Wrong foot and i lost. Game two i can resolve all my red spells into the Blood Moon (lucky me) and i can take the win. In game 3 i made a terrible decision to CoP: Red (Secret Tech!!!) a Bolt with my only Mana just to get 9 Damage in his Main Phase from a Fireball… reeeeally stupid but OK. I lost due to a Psi Blast and moved on to Game 3. 1-1

Jason „the Legend“ is my next opponent. We always have great games and he is a fellow Ante40 e as am i. Its always a pleasure to play against Jason and as usual we open a new Beer and Shuffle up. Also a Cigarette in between the matches is not unusual to celebrate the tournament matches. I think we are quite even with wins/losses in tournament games. But this time, he just destroys me with his Ehrnamgeddon build. I lose horribly in about 25 Minutes and go down 2-0. But i will have my revenge my friend! (More of this you find here :-). 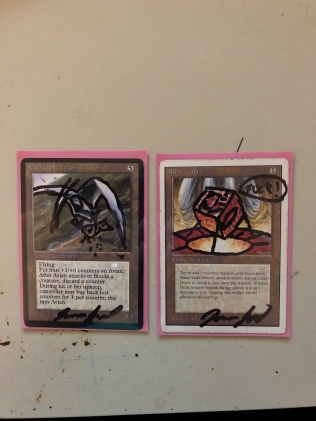 The next opponent is another Legend – Leo Bruder, a fellow Legionaire of Urborg. I am already quite intoxinated with beer and i give to Leo one of the most horrible games in his history… First i completely ignore his live amount with a bolt sitting in my hand (he is at two live, i think he is at 14 something) and the moment i get aware, i tell him to bolt i his end step which was before my actual turn… We reset and he Mana Drains the bolt just to wait until my next bolt which kills him. Second Game i have Scrubland, Scrubland, Swamp, Strip Mine, Hippie, Hippie, Troll. Mulligan to 6 and i put one Hippie on the bottom during talking and drinking (but wanted of course put the Troll down)… Yeah… Stupid isn‘t it? Game starts and i got aware of my mistake, let him know i have zero Red but can pressure up with two hippies. As Leo is the most friendly guy he lets me change the cards (on the mad mountain, things as that are possible :-)). With a really bad draw on his side i manage to take this match 2-0 and my standing is 2-2.

Final Match against Mari „the Destroyer“. We drank about half a bottle of „Kraken Rum“ the night before and this match was awesome. We started with a „Release the Kraken“-Glass and had great fun. First Game he beats my ass off… Zero Chance. Second Game i slam a second Turn Shivan Dragon onto the Table. No Swords on his side. Tick-Tock-here‘s the Clock… And the Shivan sealed the Deal. Third game We battled until the Extra Turn number 4 and i took away the victory. Wow – so tight. But after this round we both were happy that we hadn‘t to play top8 but can concentrate on the really important things: RELEASE THE KRAKEN again. Haha. 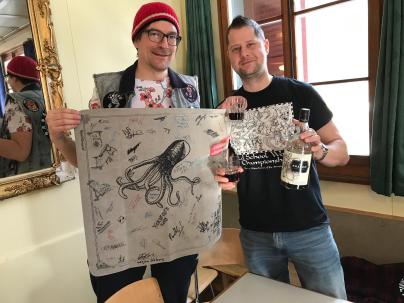 We announced the Top 8 and they battled for the King of the Mountain. Finally, Mitja got awarded with this prestige title and he will be remembered forever as the „KING“! 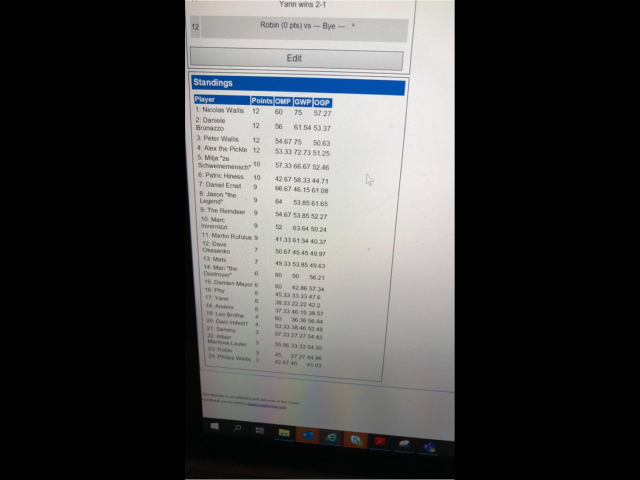 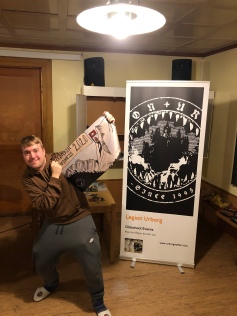 The night was still young as we finished Top8 at eight in the evening. A great Dinner lies before us! Risotto and Swiss Sausage. Gniam Gniam 🙂 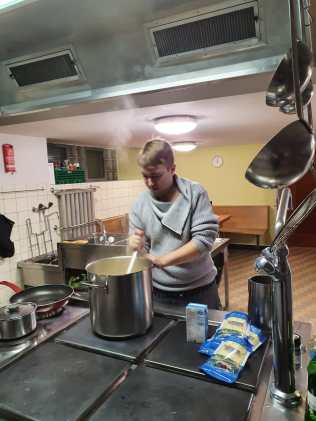 The rest of the evening was dedicated to Magic and Fun. Some players gathered for a two-Headed Giant Cube Sealed, some played individual magic, some tried to find a quiet space and some just drank more beer and enjoyed the company of all the amazing community members. Overall it was an excellent and really unique Magic experience for everybody. Thanks again to all helpers at Sunday to cleanup the whole cottage, thanks to Migja for the kitchen work and thanks to Mari for this beautiful Organizer gift – the Mountain of Madness! 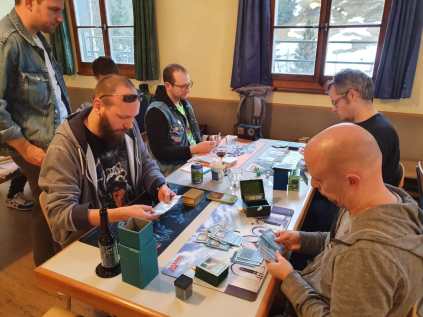 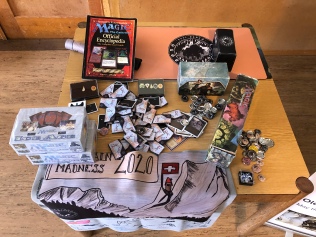 I wish you all a nice Winter and see you soon! Next Stop: Vienna for Communitour number two 2020. Chez Lions du Austria

May the Moxen be with you!

One thought on “Mountain Madness 2020”